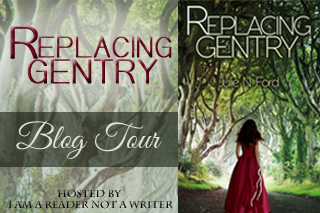 When Marlie agrees to attend a cadaver ball at Vanderbilt Medical School, she did not expect to actually see any cadavers. Or, that a strange apparition would issue her a chilling message.

Despite the cadaver's warning, Marlie is married a year later to Tennessee State Senator, Daniel Cannon, and living in a plantation-style mansion with two step sons. Add to the mix her growing suspicion that something is amiss with the death of Daniel’s first wife, Gentry; and newlywed Marlie is definitely in over her pretty Yankee head.

What begins as an innocent inquiry into her new husband’s clouded past, ends with Marlie in the midst of a dangerous conspiracy.

A modern twist on the classic Gothic romance novels of Rebecca and Jane Eyre, Replacing Gentry follows Marlie’s precarious journey as she learns the truth about the man she married.

This book took me completely by surprise.  I was not expecting some of the twists and turns in this story.  I heard that this story was a new twist on Jane Eyre and Rebecca.  So I thought I had an idea of what was going to happen, but boy was I wrong.  The plot was well crafted and had so many unpredictable twists that I was left speechless.  The story was beautifully written and well thought out.  I loved the fact how this story immediately captured my attention.  I was immediately drawn into that world.  The characters were complex and well rounded.  Marlie is just one of those characters you can't help but love.  She immediately marries a Senate, but can't change who she is.  She is determined to find out what all went down with Daniel.

Replacing Gentry definitely kept me on the edge of my seat the entire time.  This was one of those stories that I couldn't put down because I had to know what was going to happen.  What I loved about this story was the mystery.  It was very unpredictable.  I was guessing the entire time.  Replacing Gentry is a fantastic read that will definitely leave you breathless.  I was enthralled with this story after the very first page and left wanting more.  Great job Julie!!!!

Replacing Gentry is just $1.99 on Amazon

Julie N. Ford graduated from San Diego State University with a BA in Political Science and a minor in English Literature. In addition, she has a Masters in Social Work from the University of Alabama. Professionally, she has worked in teaching and as a Marriage & Family Counselor. She is the author of two women’s fiction novels, The Woman He Married and No Holly for Christmas, published in 2011. In addition, she wrote a romance/chick-lit novel, Count Down to Love, also published in 2011. Count Down to Love was a 2011 Whitney Award finalist. Her next novel, Replacing Gentry, is due for release April 9th, 2013.

Currently, she lives in Nashville, TN with her husband, two daughters and one hedgehog.

Posted by Kristina Snyder at 10:13 AM